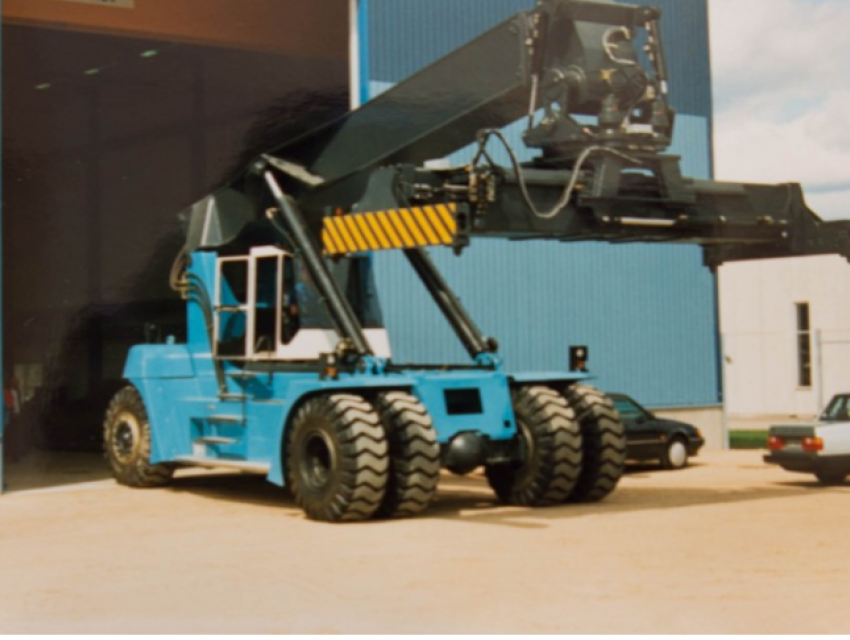 In 1994, a pioneering team of nine industry experts – Hans Carlsson, Nils-Olof Larsson, Hans Matzner, brothers Conny and Roger Persson, Anders Sandström, Göran Skogsborn, Paul Westergren, and Olle Österlund – came together to buy a local manufacturing company in Silverdalen, in south-east Sweden, where they produced their first reach stacker before moving to Markaryd in 1995. Conny and Roger are still with the company, but the other seven have since left. Their enduring legacy remains in very good hands as Konecranes Lift Trucks continues to develop the business and do what the team always wanted – to build lift trucks “with heart” for their many different customers’ world!

Since that first machine in the mid-1990s, Konecranes now produces lift trucks in Sweden, China and France, and has sold nearly 10,000 across 120 countries. The company has become renowned for the excellence of their products, their advanced technology and their global distribution and service networks that, regardless of location, get the equipment to their customers and keep it running.

Part of the success of Konecranes Lift Trucks can also be attributed to their versatility. The vehicles can be used in most industries, including logistics, manufacturing and energy. Customers can order standardized, partly or fully customized reach stackers, forklifts, and container handlers. Their technical innovations have often had significant impact: in 1999, the world’s largest barge handler came to market, with a negative capacity of 45 – 37 – 29 tons in the first three rows; in January 2019, in partnership with N.C. Nielsen, they produced the world’s largest reach stacker, with an impressive lifting capacity of 152 tons. Environmental and social responsibility have always been part of the Konecranes brand, and this dedication led to the world’s first hybrid reach stacker in 2013.

As the company has grown over the years, there have been many important milestones to remember. Starting out as SMV (Silverdalens Mekaniska Verkstad in Swedish, which translates to “Silverdale Mechanical Workshop”), they became part of the Konecranes Group in 2004. They opened a factory in China in 2007, and in 2013, they added Linde container handling to the organization. In 2017, Konecranes acquired Terex MHPS, whose lift truck business has brought Konecranes Lift Trucks substantial growth opportunities and the market leadership position they continue to hold today.

“Since the acquisition of Lift Trucks the business has become an integral part of Konecranes’ operations and success, helping to expand our company’s global footprint and setting the standard for production excellence and technology leadership,” says Panu Routila, CEO of Konecranes. “I look forward to more growth and critical contributions from Lift Trucks in the future.”

“I’ve always felt honored to be a part of the Konecranes Lift Trucks team,” says Andreas Falk, Senior Vice President of Business Unit Lift Trucks. “A big thank you to all our employees and partners who have worked tirelessly to achieve many remarkable things.”

Because September 15 falls on a Sunday this year, Konecranes Lift Trucks will commemorate the occasion on September 20 with small ceremonies at each of their key sites around the world. On the same day, in Sweden, they will hold a special event at which some of the founders will speak on stage and employees will attend a celebratory lunch.

Choose Konecranes lift trucks to get a Lifetime Advantage